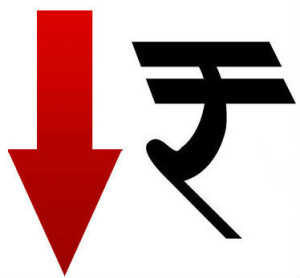 The reason for the fall in rupee is dollar is very much in use these days and thus all other currencies from various countries have fallen down very badly. Not only rupee, but also other currencies like Japanese Yen and other currencies like Euro, pound have all fell down. The other reason of rupee fall is many foreign institutional investors (FIIs) have sold their own positions in the Indian bond market, and because of huge selling pressure in the bond market amount rupee falls.

In stock market investors, the weakening rupee effects on several fronts. The companies which import raw material from abroad have already got affected. These firms are now giving more rupees to repay each dollar borrowed and are spending more rupees on imported raw material. This is eroding the profitability.

With every fall in the rupee, travelling abroad becomes more expensive as one has to give out more in rupee than for dollar spent. Already, foreign tour operators have increased up the prices for the tour packages and may revise further. Due to this people have to spend more on travel insurance. Even if they have booked the foreign tour package in advance, then also they have to furnish the differential amount until the extent of the rupee slide.

As we all desire to own the latest electronic gadget but now on it may cost more than one budgeted for. As some imported goods are billed in dollars, Indian consumers are likely to see the prices have increased up further. The prices of imported goods such as refrigerators, microwaves, mobile phones and laptops, are likely to witness a spike in this few days.

Due to fall in Indian rupee the parent of Indian students studying in foreign for degrees will have to continue shelling out more money to fulfil their child’s dreams. Due to sharp decline in the rupee, they have to expense a high expenditure in rupee to cover their tuition fees, food, stay and other expenses including the cost of overseas education. Some NRI Consultants, say, “The students going abroad for education will have to factor in a 10-15% rise in cost.” Those who have taken up education loan to pay for foreign education will have to bear a higher burden
The companies that import raw material in large quantities will be forced to hike prices for the consumer. This means that all cars and two-wheeler manufacturers could realign their prices. The area where consumers will hit worst is the fuel prices. With the declining rupee, the crude oil import bill for the government has already gone up, forcing it to jack up the petrol prices. A further fall in the rupee will lead to more hikes. So simultaneously the prices of food items will also witness a rise in the cost of transportation. Due to hike in rice there will be increase in price of the items like moving consumer goods , such as soaps, detergents, deodorants and shampoos of which crude oil are used as input, are likely to become more expensive after some days.

As the Indian rupee gets much low, the country’s middle class people will be forced to cut back on eating outside, buying branded products or new cars, studying abroad etc. as their monthly expenditure will rise by approximately 20 per cent.